A Weekend In Gloustershire and Dorset

Having had a very good season so far here in the UK I was missing only one native species.To get this means travelling south. So together with Matt Wilson and Kev and Suzanne Byrnes we headed off to Dorset considered to be the best county in England for Reptiles. The weather forecast wasn't great and right on cue as were arrived in Gloustershire at 7pm and met Kev and Suzanne down came the rain.

We had time for a quick visit to a site and found a single male Slow Worm Anguis fragilis and Smooth Newt Lissotriton vulgaris. The following morning we headed off down to Dorset (in the rain), Matt was feeling a little below par claiming to be travel sick but I think it had more to do with a visit to Kev and Suzanne's local followed by Kev's chilli vodka (I must admit my head was throbbing a bit also).

Matt had arranged for us to meet his friend Chris a warden for the Herpetological Conservation Trust (HCT). After a hour of waiting for the rain to stop we decided to head out and take a look anyway. Chris lead the way to the first area of heath, finding one of his tins, a quick flip and straight away 2 Smooth Snakes Coronella austriaca. A few more tins didn't produce anything else. After lunch it brightened up, so we headed for an area with introduced populations of lizards and quickly found quite a few Common Wall Lizards Podarcis muralis and about 4 Western Green Lizards Lacerta bilineata and a Field Vole Microtus agrestis. The male wall lizards have a lovely green colouration found in Italian populations. Later in the afternoon at another area of heath we had a reptile bonanza, adding 2 Sand Lizards Lacerta agilis, Viviparous Lizard Zootoca vivipara, 10 Grass Snakes Natrix natrix, 3 Adders Vipera berus and a few more Smooth Snakes and shed loads of Slow Worms. Under one piece of tin we had all 3 species of snake. We laso had a few Roe Deer Capreolus capreolus, Dartford Warbler Sylvia undata and a Hobby Falco subbuteo. In the evening we were treated to a display of Nightjars Caprimulgus europaeus, which continued to churr as we went to sleep in our tents. 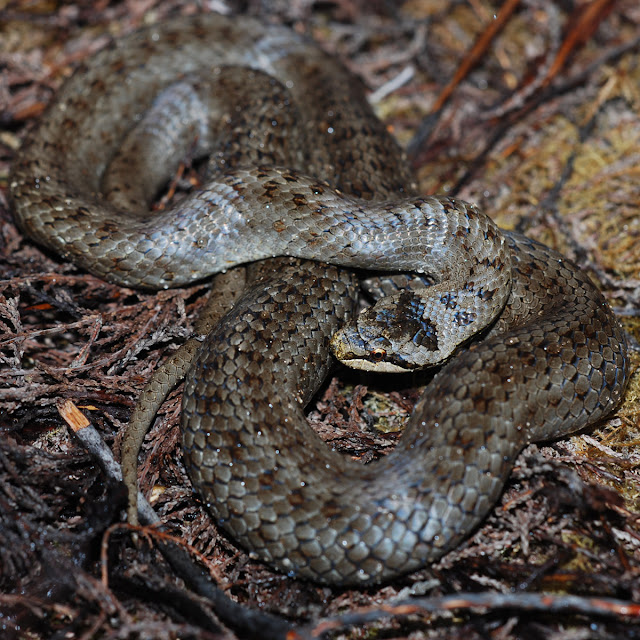 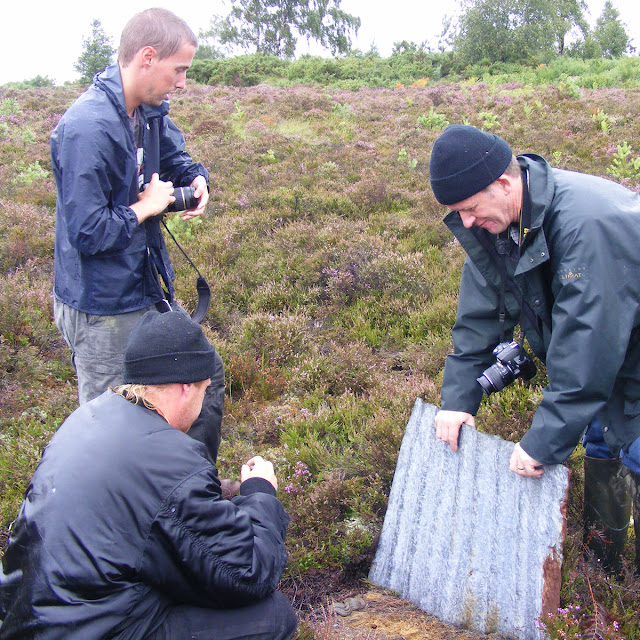 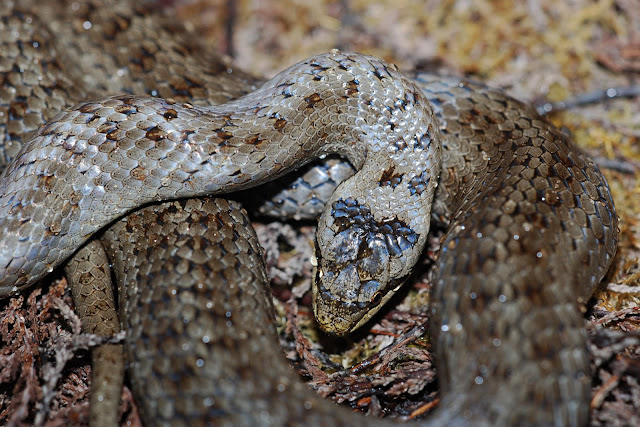 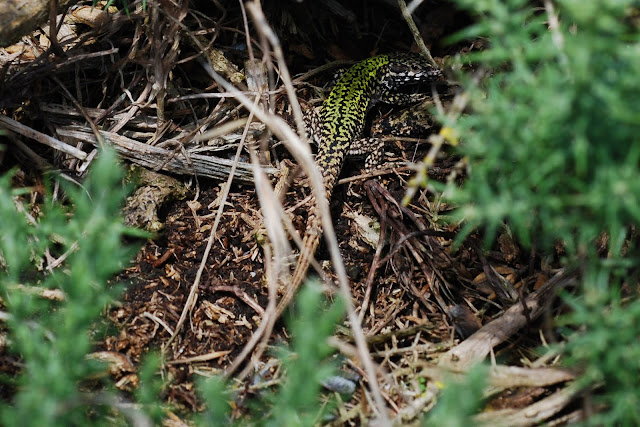 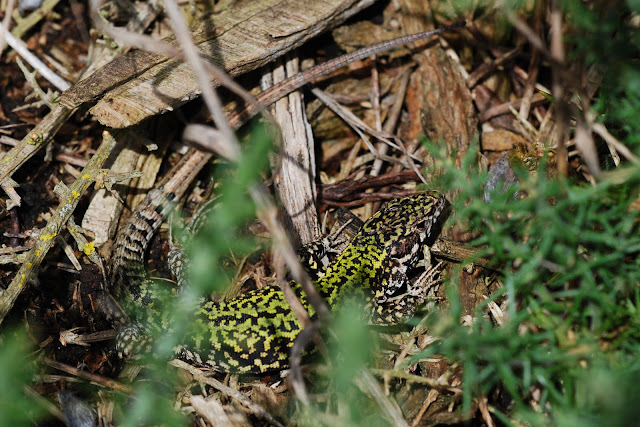 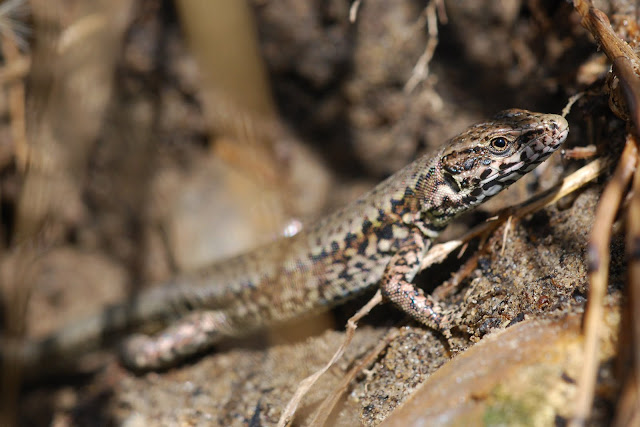 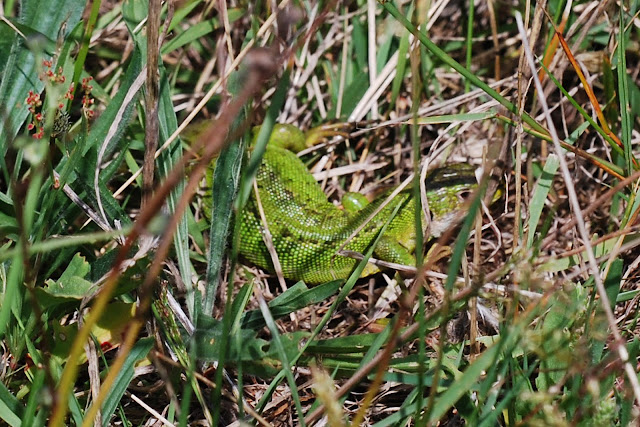 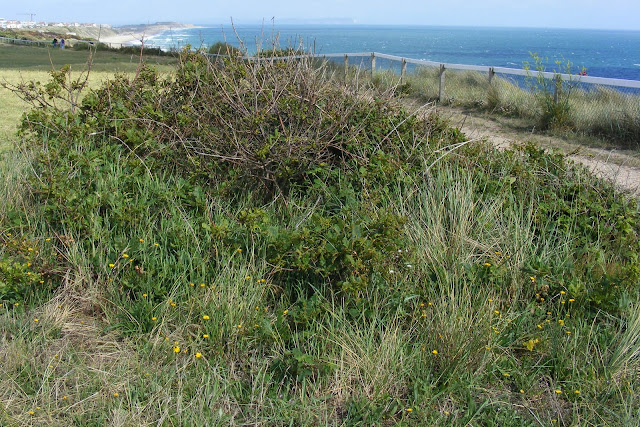 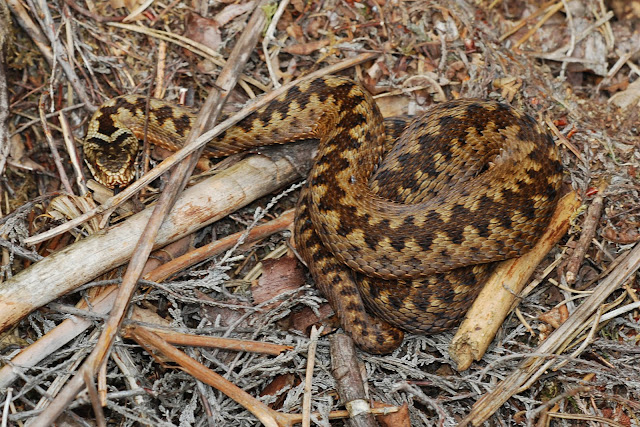 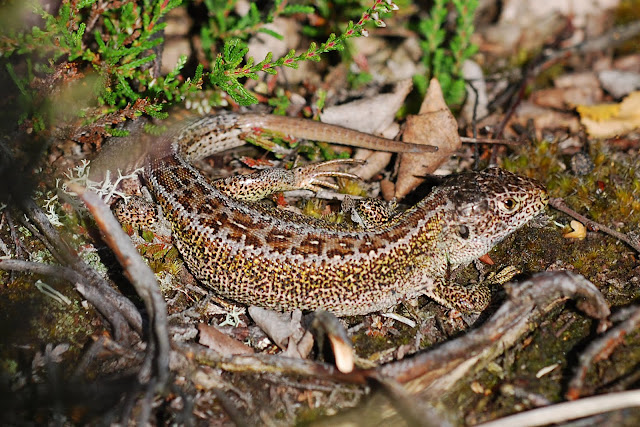 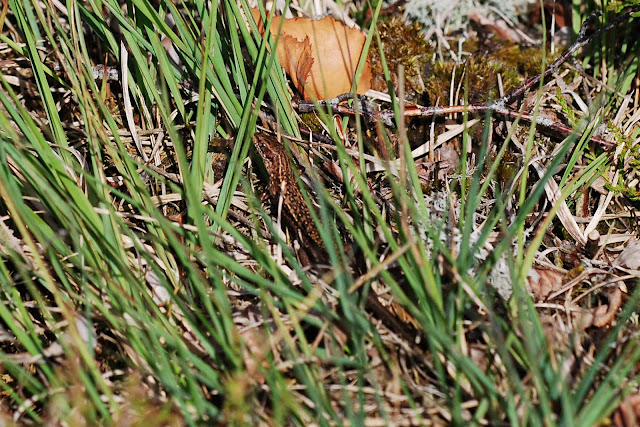 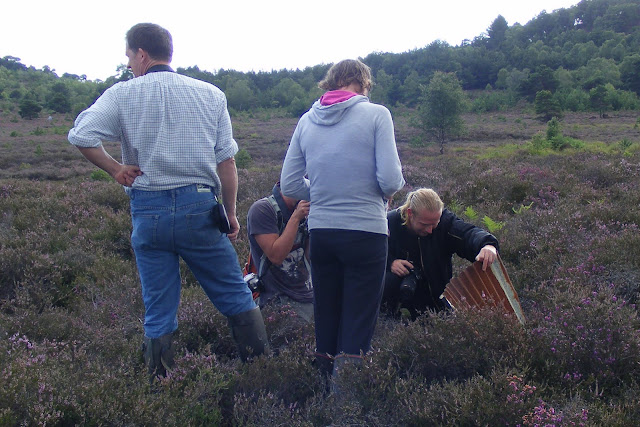 Whats under this one, Kev, Suzanne, Matt and Chris © Carl Corbidge 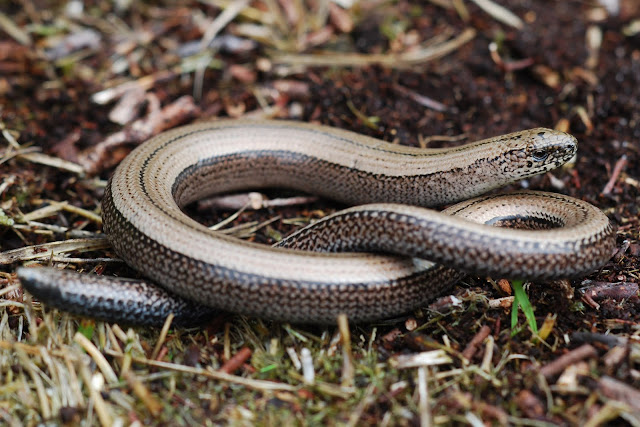 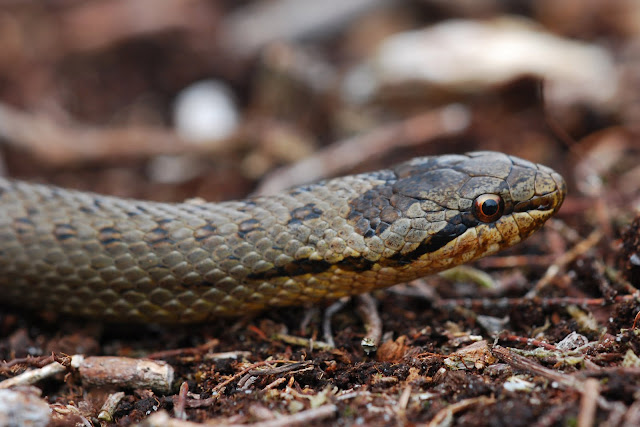 Above and Below Smooth Snake © Carl Corbidge 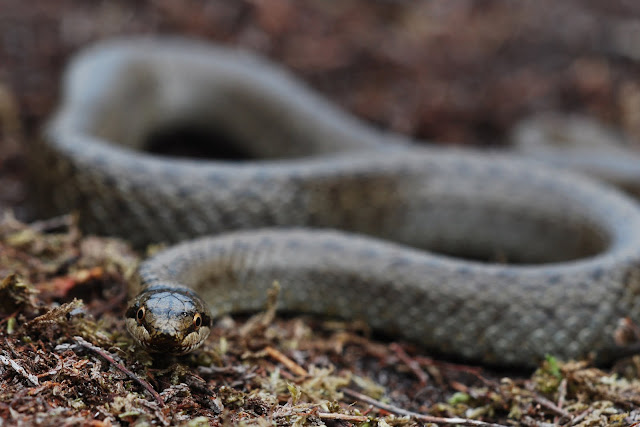 After adding Palmate Newt Lissotriton helviticus in the morning we headed back up to Gloustershire to a couple of Kev's sites. At the first site we saw several Viviparous Lizards, about 10 Slow Worm and a single female Adder. At the second site we found another half dozen Slow Worms, several Grass Snakes and a Bank Vole Clethrionomys glareolus this rounded off a very enjoyable weekend. Thanks to Chris for taking the time out to show us his best sites. 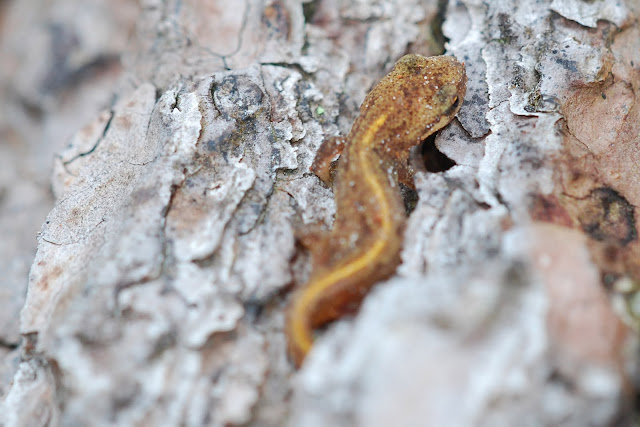 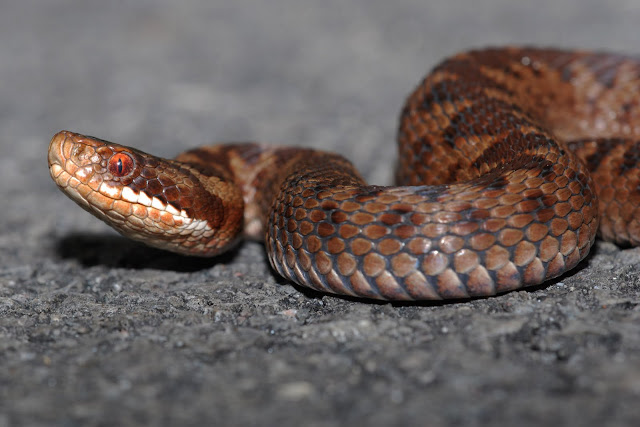 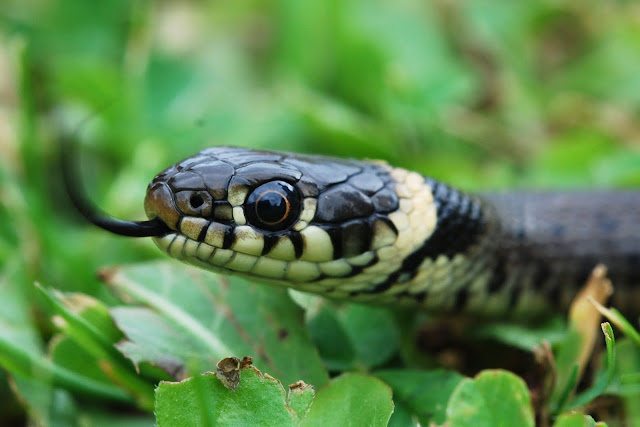 Above and Below Grass Snake © Carl Corbidge 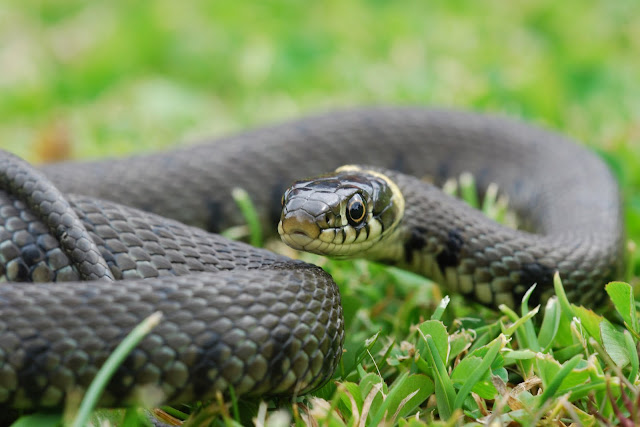